MS Dhoni in his village at Lawali, Almora ,Uttarakhand. 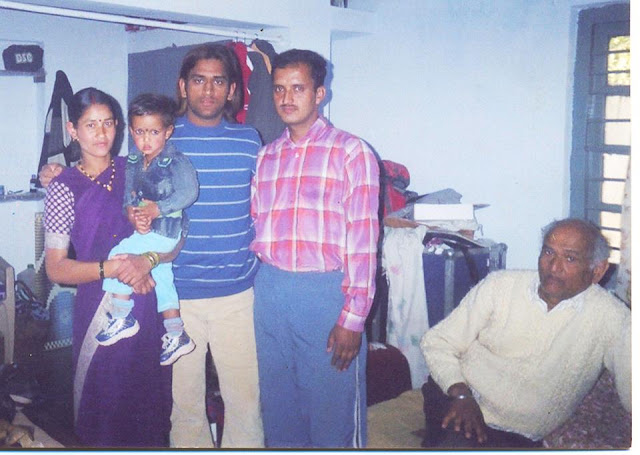 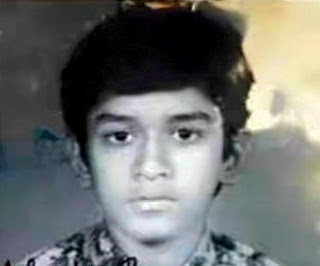 When Dhoni was 10 years old boy


MS Dhoni in his village at Lawali, Almora ,Uttarakhand.


Lawali, (Almora): The two-room house looks like any other village house of Uttarakhand Himalayas. Slate stones on the roof, a coat of lime on the wall, doors/windows painted with sky blue coloured enamel and clothes casually hanging on a jute chord outside the house. But, wait! The house (See Photo) located in a remote village in the Kumaon hil

ls of Uttarakhand state is a special one.

This is the ancestral home of one of India's most popular cricketers, Mahendra Singh Dhoni. MSD's village in district Almora is presently accessible only on foot. The nearest road head to village Lawali is Jainti, which is 4 kms away. Though electricity has reached the village, but all weather roads, medical facilities and telephone lines are yet to become available. There is no playfield in the village. Children either play cricket in small spaces in front of their houses or in agriculture fields, after the harvest is over. India's captain last came here in 2003.

Lawali village is home to 35 families, with an approximate population of about 300-350.


How to reach Mahi's village!


Jainti, the nearest road head to village Lawali, is located some 75 kms from Almora. Regular bus and jeep is available from Almora to Jainti. After that one has to walk 3 kms on foot. It normally takes 1 to 2 hours to reach MSD's village.

Mahendra Singh Dhoni commonly known as M. S. Dhoni; born 7 July 1981) is an Indian cricketer and the current captain of the Indian national cricket team in limited-over’s formats. An attacking right-handed middle-order batsman and wicket-keeper, he is widely regarded as one of the greatest finishers in limited-over’s cricket. He made his One Day International (ODI) debut in December 2004 against Bangladesh, and played his first Test a year later against Sri Lanka. Dhoni holds numerous captaincy records such as most wins by an Indian captain in Tests and ODIs, and most back-to-back wins by an Indian captain in ODIs. He took over the ODI captaincy from Rahul Dravid in 2007 and led the team to its first-ever bilateral ODI series wins in Sri Lanka and New Zealand. Under his captaincy, India won the 2007 ICC World Twenty20, the CB Series of 200708, the 2010 Asia Cup, the 2011 ICC Cricket World Cup and the 2013 ICC Champions Trophy. In the final of the 2011 World Cup, Dhoni scored 91 not out off 79 balls handing India the victory for which he was awarded the Man of the Match. In June 2013, when India defeated England in the final of the Champions Trophy in England, Dhoni became the first captain to win all three ICC limited-over’s trophies (World Cup, Champions Trophy and the World Twenty20). After taking up the Test captaincy in 2008, he led the team to series wins in New Zealand and West Indies, and the Border-Gavaskar Trophy in 2008, 2010 and 2013. In 2009, Dhoni also led the Indian team to number one position for the first time in the ICC Test rankings. In 2013, under his captaincy, India became the first team in more than 40 years to whitewash Australia in a Test series. In the Indian Premier League, he captained the Chennai Super Kings to victory at the 2010 and 2011 seasons, along with wins in the 2010 and 2014 editions of Champions League Twenty20. He announced his retirement from Tests on 30 December 2014.Dhoni holds the record for the most number of sixes in International Cricket by an Indian and is 5th across the World having hit 304 sixes in 448 innings behind Shahid Afridi, Chris Gayle, Brendon McCullum and Sanath Jayasuriya subsequently.

Dhoni married Sakshi Singh Rawat, his schoolmate in DAV Jawahar Vidya Mandir, Shyamali. A native of Dehradun, Uttarakhand, on 4 July 2010. At the time of their marriage, she was studying hotel management and was working as a trainee at the Taj Bengal, Kolkata. After the retirement of Sakshis father from his tea growing business, their family shifted to their native place, Dehradun.

The wedding took place one day after the couple got engaged. According to Bollywood actress Bipasha Basu, a close friend of Dhoni, the wedding was planned for months and was not a spur of the moment decision. Dhoni became a father on 6 February 2015 to a baby girl named Ziva.

Dhoni was born in Ranchi, Bihar (now in Jharkhand), and he identifies as being a Rajput. His paternal village Lvali is in the Lamgarha block of the Almora District of Uttarakhand. Dhoni's parents, moved from Uttarakhand to Ranchi where his father Pan Singh worked in junior management positions in MECON. Dhoni has a sister Jayanti Gupta and a brother Narendra Singh Dhoni.Dhoni is a fan of Adam Gilchrist, and his childhood idols were cricket teammate Sachin Tendulkar, Bollywood actor Amitabh Bachchan and singer Lata Mangeshkar.

Dhoni studied at DAV Jawahar Vidya Mandir, Shyamali, Ranchi, Jharkhand where he initially excelled in badminton and football and was selected at district and club level in these sports. Dhoni was a goalkeeper for his football team and was sent to play cricket for a local cricket club by his football coach. Though he had not played cricket, Dhoni impressed with his wicket-keeping skills and became the regular wicketkeeper at the Commando cricket club (19951998). Based on his performance at club cricket, he was picked for the 1997/98 season Vinoo Mankad Trophy Under-16 Championship and he performed well. Dhoni focused on cricket after his 10th standard.Dhoni was a Travelling Ticket Examiner (TTE) at Kharagpur railway station from 2001 to 2003, under South Eastern Railway in Midnapore (W), a district in West Bengal. His colleagues remember him as a very honest, straightforward employee of the Indian Railways. But he also had a mischievous side to his personality. Once, while staying at the railway quarters, Dhoni and a couple of his friends covered themselves in white bedsheets and walked around in the complex late in the night. The night guards were fooled into believing that there were ghosts moving around in the complex. The story made big news on the next day.

Dhoni's maiden century against Pakistan in Faisalabad (148) is the fastest century scored by an Indian wicket keeper. Only three centuries by two other wicket-keepers (Kamran Akmal and Adam Gilchrist 2) were faster than Dhoni's 93 ball century.

Under Dhoni's captaincy, India defeated Australia by 320 runs on 21 October 2008, biggest ever win in terms of runs for India.

Dhoni holds the record for most catches by an Indian player in an innings. He achieved this feat by taking six catches during the first innings of the third test against New Zealand in Wellington in April 2009.

Dhoni is the second wicketkeeper to have effected 6 dismissals in an innings apart from a fifty in each inning of a Test match. Denis Lindsay had accomplished the feat for South Africa against Australia at Johannesburg in December 1966 -69 & 182 and 6 catches + 2 catches.

Under Dhoni's captaincy, India reached their highest test score of 7269 (decl) during Sri Lanka's tour of India in 2009. Their 20 victory in the series took them to the number 1 ranking in Test cricket for the first time in history.

Under Dhoni's captaincy, India did not lose a test match until the first test versus South Africa in Nagpur in February 2010. As a captain, he holds a record for longest unbeaten run in tests from his debut, 11 tests (8 wins and 3 draws). This record crossed former Australian captain Warwick Armstrong's run of 10 unbeaten tests (8 wins, 2 draws) from the debut. In Dhoni's streak, however, there was a period of injury in which Virender Sehwag led the side (for 3 draws). So India's unbeaten streak was for 14 tests, of which 11 were Dhoni's.

However Dhoni's unbeaten streak of 11 Test matches ended during India's tour of England in 2011 and England also replaced India from No. 1 spot in ICC Test team rankings.

Dhoni shares with Nayan Mongia the record of most dismissals (8) by an Indian wicket-keeper in a Test match (as of February 2013).

Dhoni holds the record of most dismissals (8- 7 catches and 1 stumping) by an Indian wicket-keeper in a Test match which includes at least one stumping (as of Feb 2013).

Dhonis 224 is the highest score by an Indian captain in Tests bettering Sachin Tendulkars 217 against New Zealand at Ahmedabad in 1999.

Dhoni has registered the highest Test score by an Indian wicketkeeper. On 193, he beat a long-standing record of 192 held by Budhi Kunderan against England in 1964, also scored in Chennai.

Dhoni has registered the highest score in Test history by a wicketkeeper-captain beating Englishman Alec Stewarts 164 Vs South Africa in 1998.

Dhoni is the first Indian wicketkeeper to complete 4,000 Test runs.

Dhoni is the most successful Indian Test captain with 24 Test victories, eclipsing Sourav Gangulys record of 21 victories from 49 Tests.

Dhoni has the dubious distinction of an Indian captain with most Test defeats overseas with 11 Test losses.

After hitting a six in third test match between England and India in Southampton, Dhoni has completed 50 sixes as a captain and made a record.

On 31 October 2005 Dhoni scored 183* runs of just 145 balls against Sri Lanka in Sawai Mansingh Stadium, Jaipur, which is the highest score made by any batsman in the second innings which was latter bettered by Australian player Shane Watson who scored 185* of 96 balls against Bangladesh at Dhaka on 11 April 2011. The innings featured 10 Sixes the most by an Indian in an innings, and the fifth highest in ODIs.

He broke Adam Gilchrist's record of 172 for the highest score made by a wicket keeper.

Dhoni has the fourth highest batting average (52.24) in One Day International cricket, in the list of cricketers with more than 5,000 runs.

Among Indian batsmen who have played more than 50 matches, Dhoni has the highest average. Dhoni's batting average is also the highest among wicketkeepers in ODIs.

In June 2007, Dhoni(139*) and Mahela Jayawardene(107) set a new world record for the sixth wicket partnership of 218 runs against Africa XI during the Afro-Asia Cup.

Dhoni passed Shaun Pollock's record for the highest individual score by a number seven batsman in one-day internationals during his unbeaten innings of 139.         Incidentally, Pollock record stood for just three days as his score of 130 came in the first match of the 2007 Afro-Asia Cup while Dhoni's century came in the third and final match of the series.

Dhoni also holds the records of the most dismissals in an innings by an Indian wicketkeeper and joint International (with Adam Gilchrist)                  with 6 dismissals (5 catches and one stumping) against England at Headingley 2 September 2007.

Dhoni holds the Indian record of most dismissals in ODIs. He went past Nayan Mongia's 154 for India on 14 November 2008 when he caught Ian Bell off Zaheer Khan at Madhavrao Scindia Cricket Ground, Rajkot. However including 3 ODIs against Africa XI, his 155th dismissal was TM Dilshan caught off Munaf Patel at R. Premadasa Stadium, Colombo on 24 August 2008.

Dhoni, when he was on four during his innings of 23 against Sri Lanka at R.Premadasa Stadium, Colombo on Saturday, completed 4,000 runs in ODIs. Having already effected 165 dismissals (125 catches + 40 stumpings), Dhoni became the sixth wicketkeeper after Adam Gilchrist, Andy Flower, Alec Stewart, Mark Boucher and Kumar Sangakkara to complete the "double" of 4,000 runs and 100 dismissals in the history of ODIs. Dhoni’s feat of completing the "double" of 4,000 runs and 100 dismissals in only 114 innings is a world record. He is the youngest wicket-keeper batsman to do so (27 years and 208 days).

Dhoni is the only captain in the ODIs to score a century while batting at number 7. He did it against Pakistan in December 2012.

On 31 January 2014, MS Dhoni became the fourth fastest batsman to complete 8,000 runs in one-day cricket during the fifth and final ODI against New Zealand.

Second most wins by any captain in ODI history - Dhoni involved in 108 ODI wins as a captain up to 16 October 2016.

Posted by Uttarakhand News
Labels: Almora, MS Dhoni in his village at Lawali, Uttarakhand.
Email ThisBlogThis!Share to TwitterShare to Facebook