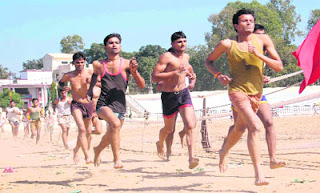 Haridwar, October 29
For the first time since the creation of Uttarakhand, an Indian Army recruitment rally is being organised in Haridwar city. Today at Rishikul ground the registration process began at 5.30 am.


This was followed by a 1.6-km run with mandatory Army physical-sport tests being done till the evening. The recruitment was being done for the post of hawaldaar. Soldiers will be recruited in the coming days. This recruitment drive is being conducted in the seven districts of Garhwal division.
Seven districts falling in Garhwal division are Pauri, Tehri, Chamoli, Uttarkashi, Rudraprayag, Dehradun and Haridwar.
Army Recruitment Office, Lansdowne, the home of Garhwal Regiment, is conducting this recruitment drive that began from today onwards and will be on till November 3.
Only youths falling in the age bracket of 17.6 years and 23 years can take part in this recruitment rally.
Talking to TNS, Colonel Virendra Kumar said that in view of the mass demand of the public, for the first time the pilgrim city of Haridwar was witnessing an Army recruitment drive, which will open doors for the willing youths of the district to be a part of the royal Indian Army.
He further stated that total transparency was observed in the recruitment process and applicants had been urged not to come in contact with middlemen or outsiders who took money for making them pass the recruitment examination and physical tests.
Major Ujjwal Pratap said that all those applicants who passed the physical, medical and other tests would have to appear for a written examination to be conducted at Lansdowne Army Recruitment Office in Pauri Garhwal.
As per Subedar Major MR Sharma, those applicants not having domicile certificates of Uttarakhand would not be allowed to take part in this entry process at all, as this recruitment was specially being conducted for the youths of Uttarakhand only.